Who says you can’t teach an old laptop new tricks? About 7 years ago, my Dad and I purchased new HP laptops – I needed one for school. The two that we purchased were very similar- the one I had was an HP\Compaq NX5000 and his was an HP\Compaq NC6000. They look nearly identical, but the NX model is maybe 1\4 inch wider. About a year ago mine died (or so I thought…another post for that one), and more recently, my Dad had me setup a new laptop for him- so the NC6000 was retired.

I figured I could breathe some new life into it- so I replaced the HDD, added 2GB of RAM, and proceeded to install Windows 7. The first issue was that I couldn’t boot from USB drive so I had to burn the dvd media. Overall, the install was fairly uneventful- most of the devices had drivers from the install media. I did have to use Windows Update to get a few drivers – for the ATI 9600 video and the HP WLAN to name a few. There was also one device that wouldn’t update – the typical ‘Base System Device’. I tried searching for the device ID- which gave a hint about the device. I then put the old HDD back in and booted into the XP install to see that it was the 02Micro MultiMediaBay Accellerator. Fortunately, I was able to find Vista drivers for it which installed successfully…granted the driver date is 2002…a little worrysome.

***Update: Here are the drivers for the O2Micro devices: All in all, this isn’t a bad laptop for being ~7 years old. With the ATI video controller, Aero is enabled, and works well. Honestly, the only ‘slow’ thing about this system is the processor – a single core 1.6G. But it’s not too noticable. The experience index counts the video as the slowest part.

The disk and RAM help keep things snappy. However, this is NOT by any means a multimedia laptop. Pictures, audio, and most streaming video are ok…but no HD video by any means.

So all in all, this is more like a more robust netbook…granted it’s not the smallest thing in the world- it is by no means ‘retired’. 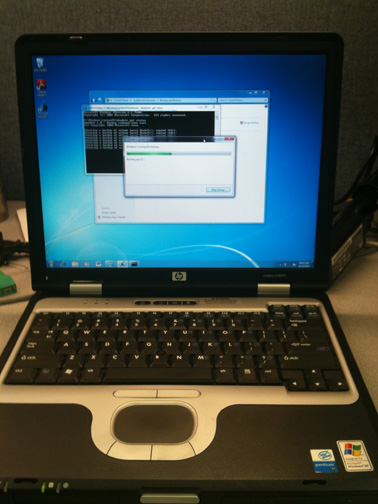