One of the primary uses for our Intel NUC is as a cable box replacement HTPC – so that means there’s always movies, recorded TV or live TV streaming to it over the network. In the past, I was able to direct wire and use the ethernet port giving 1Gbps speed which is more than enough. But now that we moved, that is no longer an option – fortunately, I installed an Intel AC-7260 wireless card and the NUC includes built-in internal antennas. But there’s a problem – they’re not that great. Connected to a 5GHz AC network where the AP was no more than 20ft away, the connection was spotty at best – sometimes dropping below 90Mbps. It was time to install an external wireless antenna on the NUC.

Being a streaming box means that this NUC needs lots of network – especially when streaming live TV from an HDHomeRun Prime. I have done some testing of this scenario in the past but now we were going to rely on it full time – some serious WAF was at risk here. The absolute best I was able to get on this connection was noted by Windows as 120Mbps – a far cry from the theoretical maximum of ~800Mbps. 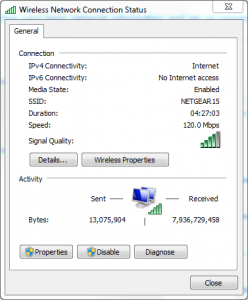 I was not concerned so much about the actual throughput as I was about the overall signal quality – uncompressed live TV requires a consistent, high quality connection, and this was not it. There were constant pixellation issues and channel changes took a noticeable amount of time.

The antennas I purchased are these from Amazon for around $10:

The install was fairly straightforward with two exceptions:

This, however, leaves tons of room for the antennas to be installed. 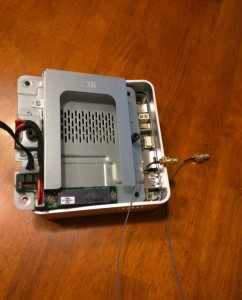 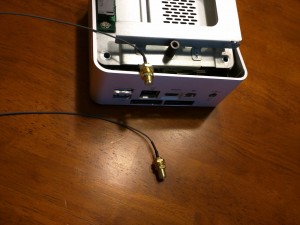 Installation was simple – drill two holes, re-install the motherboard, and install the antenna sockets with the included lock nuts. 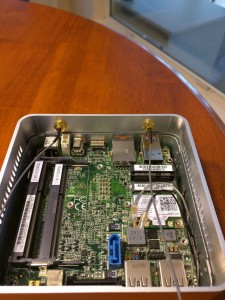 I did not think to remove the stock antenna wires while the board was out of the box. 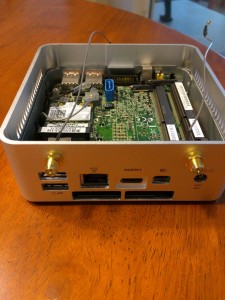 While it may look a bit silly now, the performance is VASTLY improved – I like to think of it as having ‘bunny ears’ now. 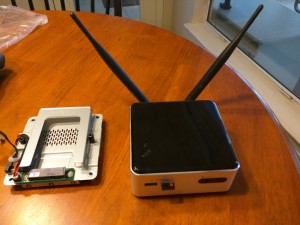 This modification was well worth it – the signal quality is much better and there is no longer pixellation or ghosting while watching live TV. While Windows reports at best 330Mbps and at worst 270Mbps, this is more than double the throughput of before the mod and again, the connection quality is so much better. 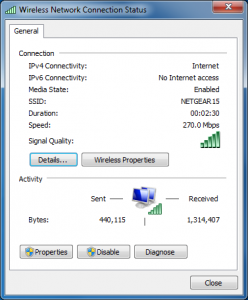