Happy New Year!! And with the new year comes new internet\TV service for the house – actually, it isn’t completely new, it’s the same service, just at a different address. Who is the ISP you ask? Why, it’s Comcast. Admittedly, I am one of the outliers in their “median network usage” calculation between lab traffic, cloud backups, and (legitimate) streaming traffic – and I also probably know and care more about security and networking than a large percentage of their customers. And in all honesty, once the service is (finally) setup correctly, it’s usually quite reliable.

My beef is not with the customer support team either. Every person has been very courteous and tried their darndest to solve my problems….I said courteous, I didn’t say technologically capable. So lets discuss my specific scenario – moving from one part of Florida to another and using the ‘Movers Edge‘ program.

My initial plan was to get a backup ISP – and after all of the above outages, it was clear that I would need something. But there’s a problem – I can’t even get crappy old-school DSL in this area. I’ve tried. Several times. There’s nothing available other than Comcast. And I am not dealing with the latency of satellite. I may end up paying for 4G cellular, but that’s really expensive for the amount of data you get. South park hit the nail on the head on this one. 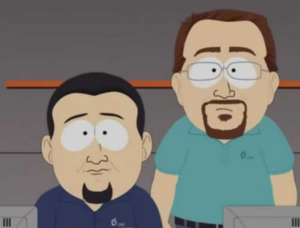 I will admit that I’m a ‘unique’ customer – and some of these issues are caused by my requirements:

Then there are the things that everyone should hate Comcast for:

But all of this doesn’t matter – It won’t change anything. There’s simply no competition (again, South Park is spot on here) and when customers don’t have a choice, Comcast can get away with whatever they want. I miss Verizon FIOS.